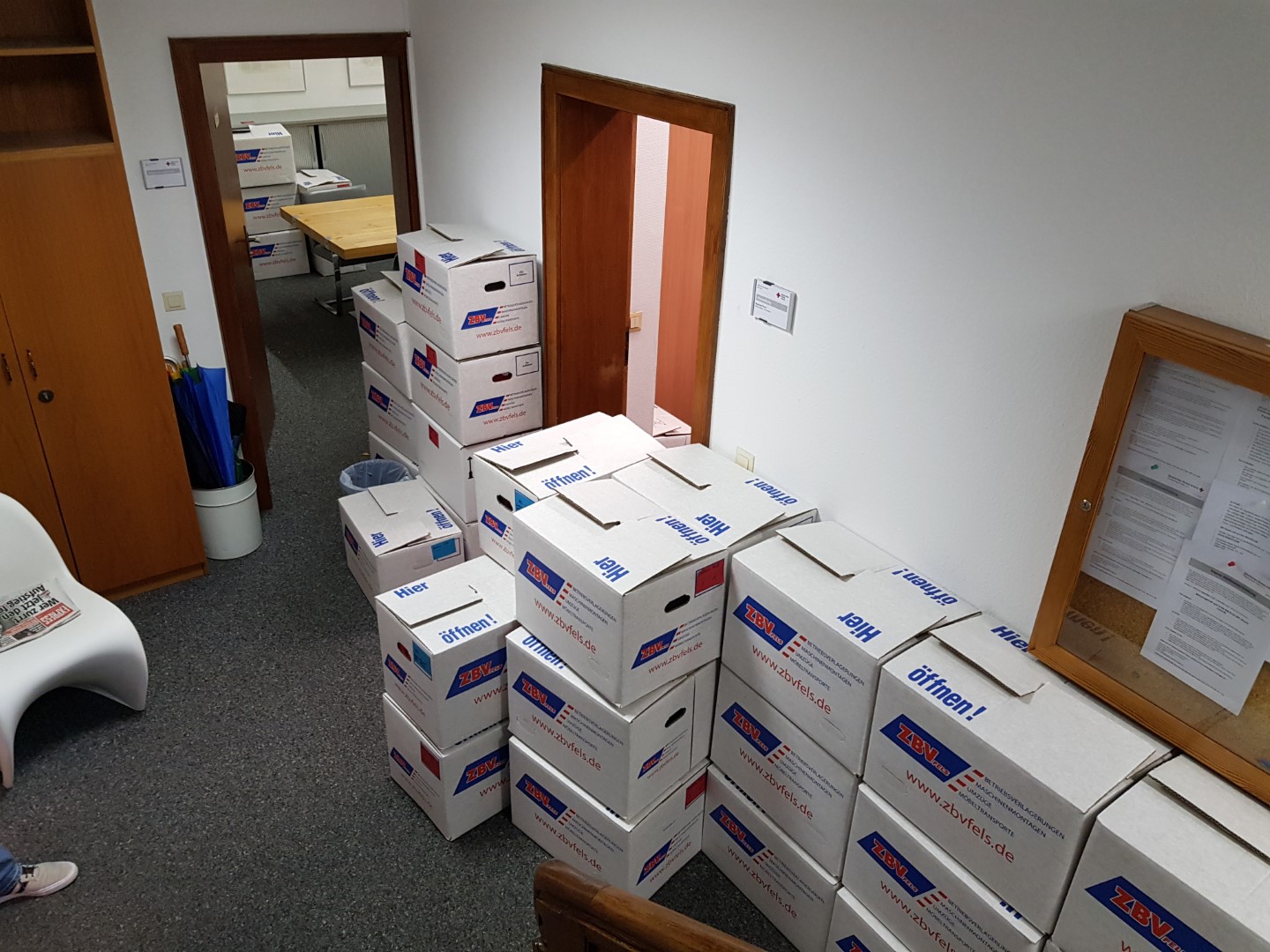 At the beginning of the year, the new headquarters of a well-known non-profit organization in Cologne was completed. Of course, this meant that the employee workstations, meeting rooms, archives and IT had to be relocated. In addition, the relocation had to take place over the weekend in order to keep our customer's work stoppage to a minimum. Since the unloading site was a new building, all walkways, including elevators, doors and passages, were lined and protected in advance to prevent possible damage. The more than 1700 moving boxes and a good 400.0 cubic meters of removal goods were moved from the three loading points to the five floors of the new building on schedule. Thus, all employees were able to start their work in the new offices on time on Monday. 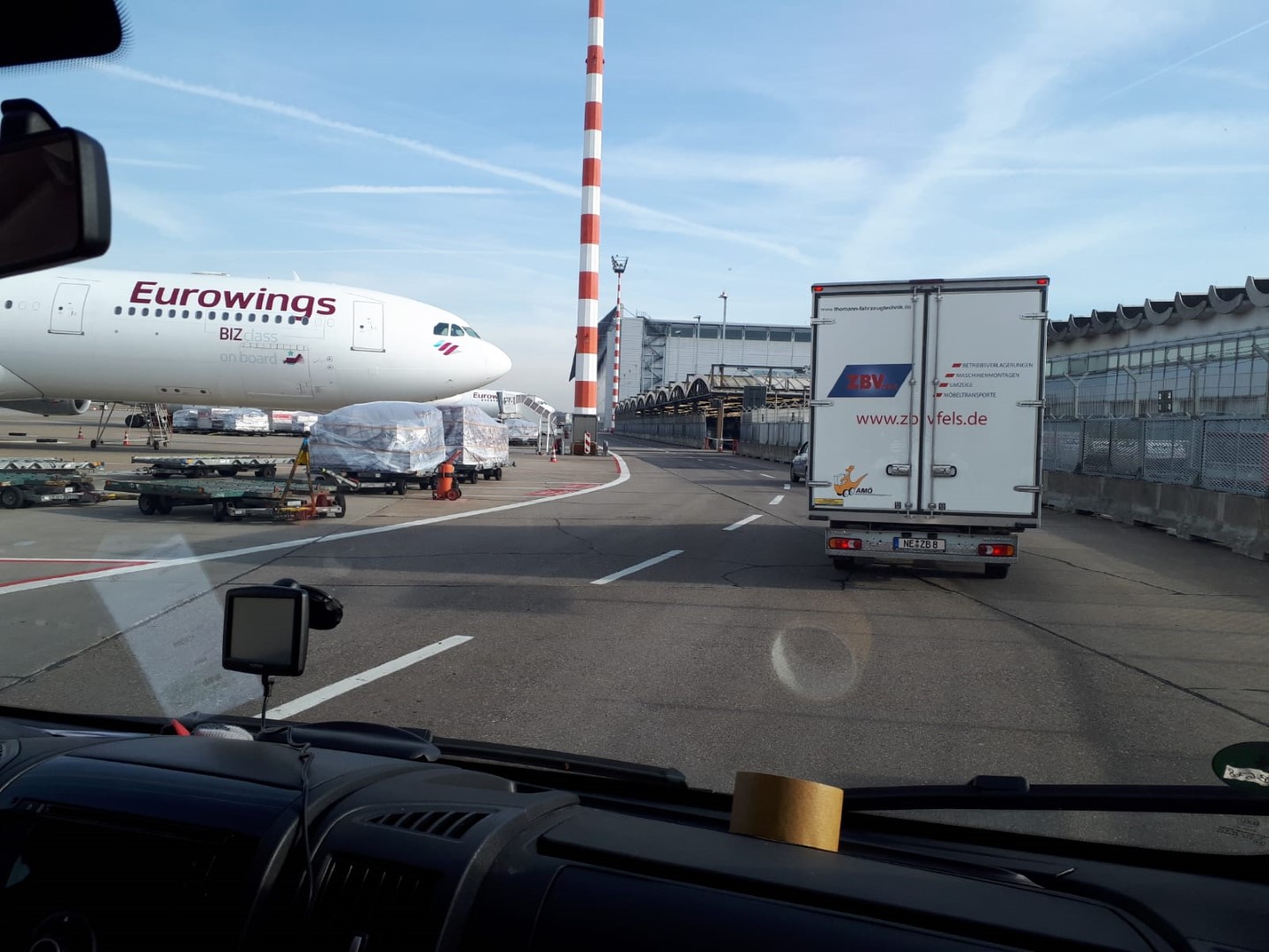 Once again, the two departments of ZBV were able to work hand in hand on a project: The office of a customer at Düsseldorf Airport had to be moved only a few 100 meters, but into the security area of the airport. Here, not only were special conditions imposed on the personnel deployed, but also strict monitoring by several security guards. Several trucks were used, which had to be checked during the drive onto the airport premises. The move was completed within a very short time to the full satisfaction of the customer. The ZBV team for heavy transports also came into action: A safe of almost 500.0 kg had to be moved additionally. A special transport device was used for this purpose. Thanks to this new transport technique, the safe was loaded quickly and transported safely. Thanks to the coordination by the project manager on site, the customer had a contact person at all times and the project was completed smoothly and on schedule.

We congratulate Niklas Zagolla, son of the managing partner Joachim Zagolla, on the granting of sole power of attorney. This is a further step towards succession planning for the family business. The comprehensive power of attorney was legally entered in the Commercial Register B in November 2016. 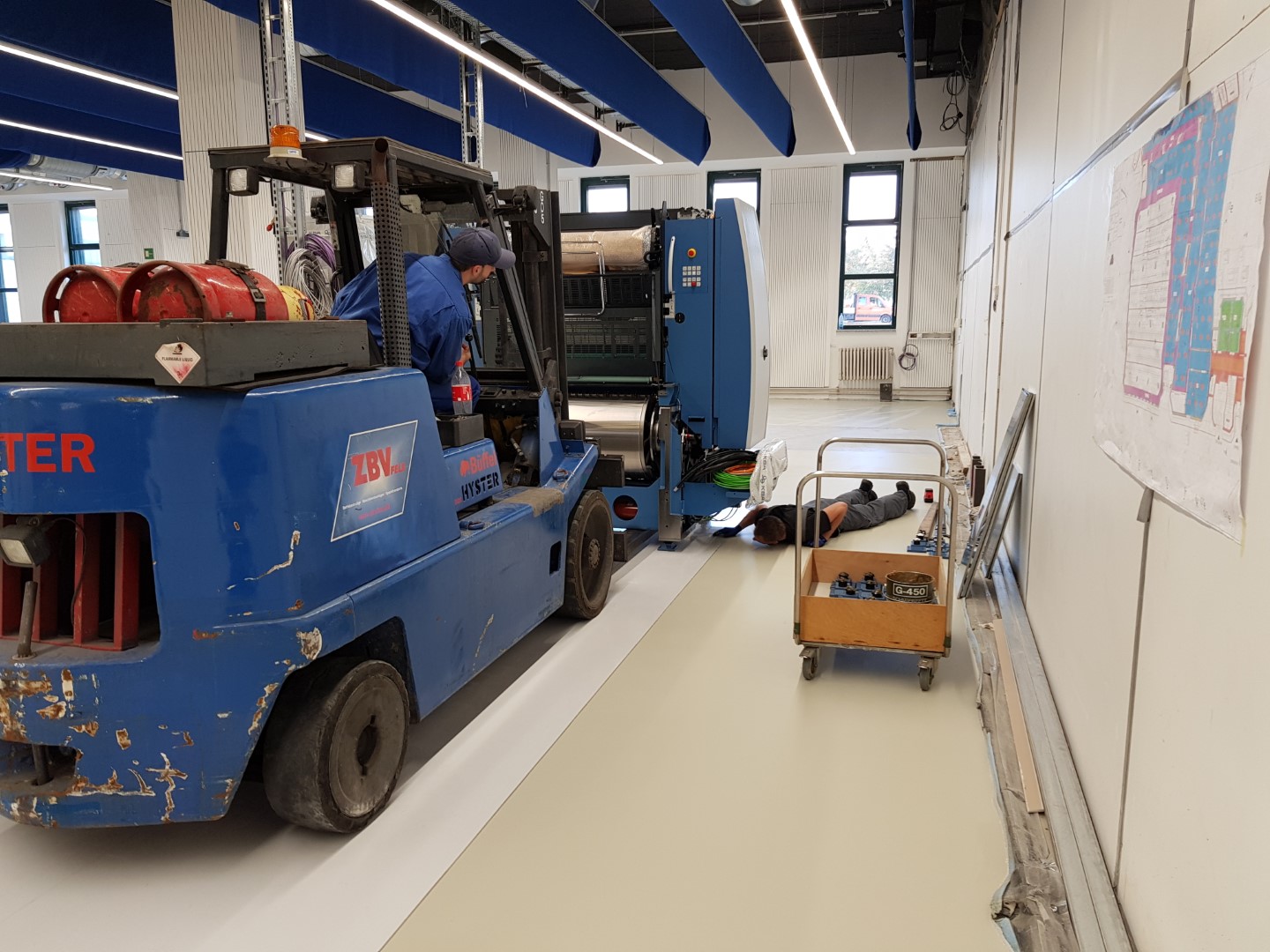 Another project in the last few weeks was the delivery and installation of two KBA RA105-5Pro & RA105-4Pro presses at a customer in NRW. In total, 6 articulated trucks had to be unloaded over 2 days, the machine parts unpacked and successively brought in. Both machines were delivered on time, so that the ZBV Fels could start with your application and for the respective truck - as well as the assembly team no idle times arose.

Not only the low ceiling height but also the recently renewed industrial floor presented a further challenge. The machines had to be brought in packed on pallets, as suspended transport was not possible due to the tightly dimensioned entrance door. Our special forklift "Büffel" was used for unloading and bringing in the machines. Due to its gas drive and compact design, this truck is ideally suited for driving into narrow or enclosed spaces. Thanks to years of experience, the processes were quickly coordinated and the team brought in part by part. The printing units were then lifted off the crate bases, placed and subsequently aligned only at the staging area.

When things get bulky, heavy and difficult, our heavy-lift team is in demand. This was also the case for the transport of a high-quality piano and its installation on the 3rd floor for a customer in Cologne. The concert piano was temporarily stored in our furniture warehouse for about four weeks until it could be delivered to the pianist in Cologne. For this purpose the complete street had to be closed and the traffic had to be diverted. The piano was specially packed by our staff and brought to the 3rd floor from the outside by means of a truck-mounted crane. It was not possible to bring in the piano via the staircase or from the outside by means of an inclined elevator. The project was completed quickly and on schedule, so that the road closure could be lifted early. Our heavy-lift crew specializes in piano transport, safe, vending machine and equipment transport, as well as the transport of heavy art, including professional packing.

At the moment, the "Alois Senefelder" Vocational School Center in Munich is considered to be the largest school facility in Germany in the field of print processing and bookbinding. In order to stay technologically up to date, the decision was made to install a new book sewing machine with the special feature that it had to be installed in the basement of the school center. This is where ZBV Fels Gmbh came in as a specialist company for machine transport and installation. The machine was transported from the factory to the machine installation site in the basement. Starting with the road closure in Munich, lifting the machine across the schoolyard in front of the basement window, and finally placing the machine and lowering it into the classroom - the entire project was carried out without any damage and to the complete satisfaction of the customer. Even the fact that the classroom is only accessible via a staircase and it is impossible to drive into it with a forklift, assembly equipment, etc., did not pose a problem. At the end and after successful installation of the machine, one could finally - yet quite proudly - pat each other on the back with a "Leberkässemmel". 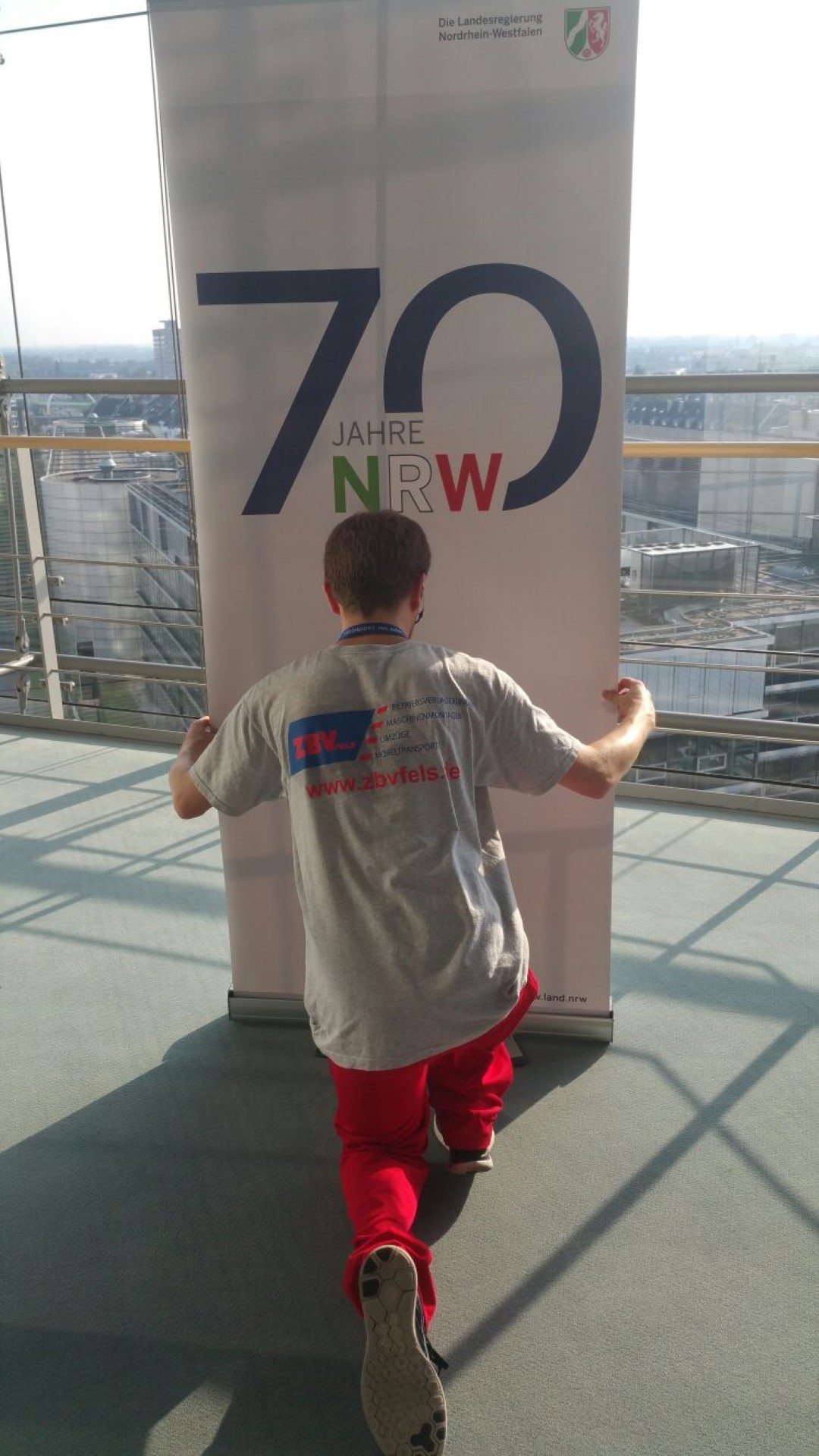 With immediate effect, ZBV Fels GmbH is the partner for moving, carrying and assembly work at the State Chancellery in Düsseldorf. The tasks include, among others:

Even at retirement age, it can be something new - and this was also the case for the residents of the Korschenbroich retirement home. The new building was due to be completed at the end of the year, so the residents had to move in. Despite the postponement of the move due to construction delays, a new schedule was drawn up at short notice and implemented by ZBV Fels on schedule. The project required not only a lot of manpower, but also understanding for the residents, since the move was carried out during the normal daily routine of the retirement home. Parallel to the ongoing daily routine of the caregivers and residents, the contents of the living areas were packed into boxes and mobile clothing carts, moved with the furniture and unpacked again one by one and put into the furniture. All residents were thus able to move into their new homes stress-free at the end of the respective moving day, without having to do anything themselves.

A particular challenge was the relocation of the dementia ward during ongoing operations. The focus was not only on moving the seniors according to plan, but above all on the well-being and satisfaction of the residents. A stress-free move for the seniors was the top priority and was carried out to the fullest customer satisfaction. Despite some last-minute changes in the process and additional tasks on site, all work was completed successfully and on time by our furniture crew and fitters to the complete satisfaction of the facility management.

Henry Ford once said, "The only thing worse than training employees and letting them go is not training them and keeping them." How right the American automotive pioneer still is today. Employees need to be trained and educated. And this is not because they are incapable from the outset, but because it sets them on the path to better performance. That is why our ZBV Fels team receives regular training and further education, because we value our colleagues as long-term team members. Among other things, the following measures are currently firmly planned and in part already being implemented:

You also want to be part of the ZBV Fels team? We are still looking for motivated colleagues for the following areas of responsibility ("Career"). 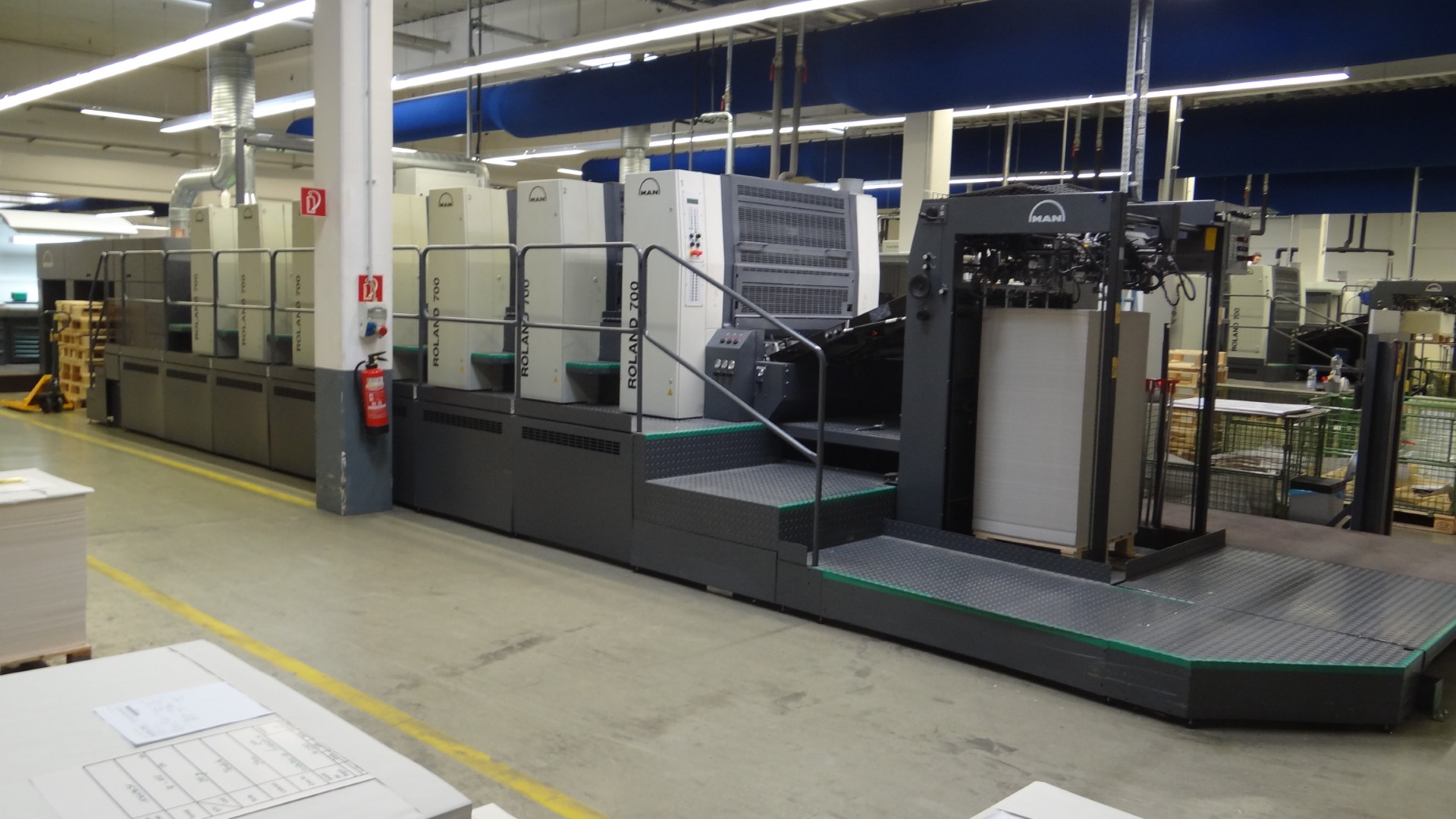 Everything from a single source! It should be well known by now that ZBV Fels not only transports and assembles machines throughout Germany, but is also the right partner when it comes to buying or selling used graphic arts machines. How useful a complete handling is for the end customer has been shown again in this project: We sold a used manroland R705LV to a long-standing customer, including delivery, installation and commissioning - as always: everything from a single source!

The entire laboratory of the wastewater testing room of the city of Krefeld was relocated by the team of ZBV Fels.

All contents, equipment and furnishings were professionally packed in advance, unpacked again at the destination after the move was completed and put away one-to-one. Laboratory tables had to be separated due to their size and realigned and grouted at the destination. Likewise parts had to be brought in by window transport at the goal area in Krefeld.